A translation dealing with the mathematical properties of mazes and labyrinths led to the discovery of some amazing mazes braved by thousands of rodents.
The Barnes Maze where rodents seek shelter from the blazing exposure of a rotund tundra. Run little rodent run.

And here’s a nasty one. It’s called the Morris Water Maze. Here’s the gauntlet: “… a rat or mouse is placed into a small pool of water—back-end first to avoid stress, and facing the pool-side to avoid bias—which contains an escape platform hidden a few millimeters below the water surface… When released, the subject swims around the pool in search of an exit…” 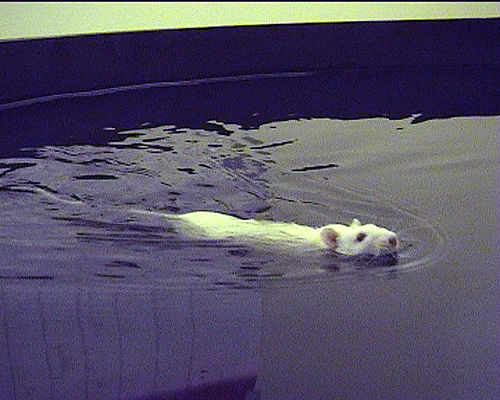 However, “… it was suggested that mice did not actually aim to find the platform, but simply waited until the technician rescued them…” heh, heh, heh.

Last but no least we have the elevated plus maze (EPM) which is a rodent anxiety maze. Turn about fair play – at last the rats are the anxious ones. We had a rat in the house once and my teenage daughter became so ‘anxious’ that she badly injured her ankle in her desperate flight from the house.

As I converted a popular math text from Hebrew into English, I ran into the Seven Bridges of Königsberg. It turns out that in Königsberg once you cross that bridge – there is no [way to avoid] coming back, for Euler proved it is impossible to traverse all bridges in a single walk without repeating a bridge…

A colorful mathematician who when out walking with his wife experienced a Eureka moment as the equation:

burst into his mind. Overcome by the magnitude of his insight, he quickly carved the equation with a penknife into the side of a bridge.

Question is: was he talking it over with his wife and she said “Billy dear, don’t forget i squared”, or was he walking with somber concentration while his wife counted daisies? Also, what with the defacement of public property? Couldn’t she at least have said something?

Another spot visited was that of Waste container

At some point I found myself translating “litter bin” and realized that it was a very British way to talk about garbage pails – so I looked it up – and lo and behold – the American “trash can” loomed out of the lexical gloom.

P.S.: Did you know there’s a book called: In and Out of the Garbage Pail.
A great solipsistic masterpiece by the renowned Fritz Perls – founder of the “here-and-now take you bow” movement…
Well, one thing led to another so I looked up Gestalt therapy and found this little gem:
“Instances of boundary phenomena can have pathological or non-pathological aspects. For example, it is appropriate for an infant and mother to merge, or become “confluent”, but inappropriate for a client and therapist. If the latter become confluent, there can be no growth, because there is no boundary at which one can contact the other. The client will not be able to learn anything new because the therapist essentially becomes an extension of the client.”
Serious questions arise: What is the boundary between a translator and his/her text – is our confluence with the text pathological or non-pathological? No doubt, there are some texts (such as marketing hype with lots and lots of names that you have to look up in order to spell them right) where the confluence of the translator’s emotions (boredom, impatience, disgust and ennui – a sense of tediousness and vexation associated with an absence of purpose – wherein the dissonance between money paid and work suffered converges to infinity) certainly verges on the pathological.